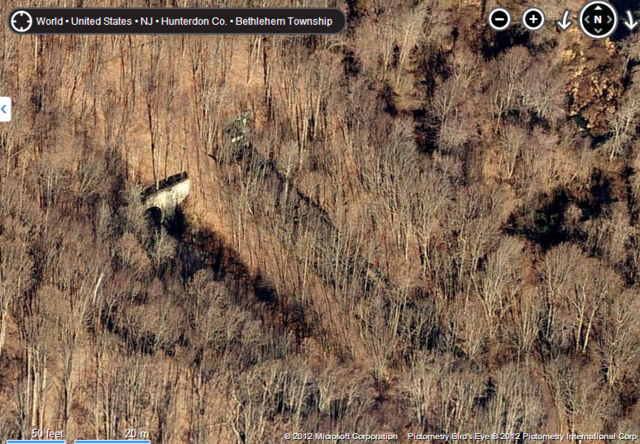 The Lehigh Valley was a natural location for an iron works, with a river, a canal system, and railroads leading directly from Pennsylvania’s coal region. The region also has an excellent source of iron just south of the region (Lathrop). By 1870, Bethlehem, Pennsylvania had already taken advantage of its location between the Lehigh River and the iron ore rich mountains and created the Bethlehem Iron Company.

Twenty miles east of Bethlehem, PA (coincidentally in Bethlehem, NJ), iron ore was being mined in a continuation of the iron ore rich mountain range in Pennsylvania. Western New Jersey had an excellent source of iron ore, but no source of coal.

In the 1870s, getting from the Lehigh Valley to Hunterdon County, NJ and beyond to New York City was not a simple trip on a Beiber Bus. The most reasonable way to ship goods between the two regions was via the Morris Canal. The coal providers in Pennsylvania needed an easier way to get their coal and steel to the population centers in New Jersey and around New York City. The solution to this was to create the Easton and Amboy Railroad. Designed to connect Easton, Pennsylvania with the ports in Perth Amboy.

The largest issue with building a train line from New York City to the Lehigh Valley was crossing the mountain ridge that separates the Raritan River watershed from the Delaware River watershed. Crossing the the mountain would mean a 400 foot climb in a distance of roughly half a mile (Drinker). This was not feasible with a train full of coal and iron ore.

It was decided in the Autumn of 1871 that the solution was to bore a tunnel. The mining engineer responsible for the tunnel was Henry Sturgis Drinker, who is argued by Bianculli to be one of the most well known tunnel engineers of the nineteenth century (Bianculli). The 4,893 foot tunnel was dug directly through the limestone and gneiss of Musconetcong Mountain (locally known as Jugtown Mountain) (Drinker). 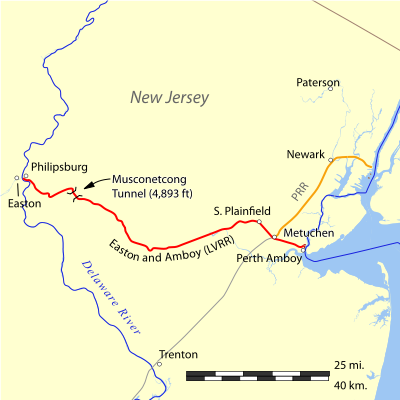 Digging began in April of 1872 and the mountain proved to be a great obstacle that took four years of digging before the tunnel was finally completed. The mountain contained many springs and groundwater reservoirs that continually flooded the tunnels and required constant pumping (Drinker). The groundwater problems are mostly likely what led to the tunnel becoming abandoned 50 years later, as today the tunnel is filled with water.

There was also conflict between the groups of people hired to dig the tunnel. These conflicts arose in September of 1872 and led to a number of murders in the area called the Pattenburg Murders or the Pattenburg Riots (Koppenhaver)(Long).

In July of 1894, 27 months later, the tunnel had been completed. Train service began shortly after in 1885, and continued for 50 years until the tunnel was closed, and a new tunnel was bored directly west of it in 1927. (Flickr: kevinhooa) The new tunnel continued to service passenger trains from New York City to the Lehigh Valley for 35 more years. February 4, 1961 marks the last time that a regularly scheduled passenger train has traveled from the Lehigh Valley to the New York City region (Assad). The outlook for restoration of the train service does not look good (Hartzell).

The new tunnel is still in service today and according to one source (Flickr: kevinhooa), several trains pass through the tunnel each day. The discussion on railroad.net describes that the rail line is heavily watched by the Norfolk Southern security, and the nearby quarry also has its own security group, and they do not suggest visiting the tunnel yourself.

YouTube user NJRAPTOR02 has taken some great footage (see links) of the trains, so you don’t need to trespass to see them.